I just wanted to post this beautiful piece of "rags" piano music called Graceful Ghost by William Bolcom.  So what does this have to do with Steven Keats you may ask?  Well it was Bolcom who did the music for one of Steven's movies Hester Street....and it was Steven who suggested him to the filmmakers.  What a wonderful musical tie-together!   Anyway, when I heard this song today,  I wanted to share it here.

This is such a lovely piece of music and I'm sure you'll shed a tear or two while listening.

Posted by KeatsFanKat at 2:16 PM No comments:

& then taking a deep-thought break... 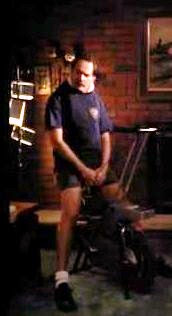 Posted by KeatsFanKat at 2:33 PM No comments:

I was watching Death Wish on DVD the other day. There is a scene where Steven, who plays Jack Toby,  is walking out from the bedroom where his wife is resting, and into the living room with Charles Bronson.  In the scene, Steven is wearing a long button down black (or dark blue) dress shirt with the sleeves rolled up a little.  He's also wearing a pair of beige bell bottom dress slacks with dress shoes.  He looks alarmingly handsome, cool and confident.  He looks like a total STAR - the classy old-school type of movie star like Cary Grant.

Steven had a great career and was a big success however, he should have been a major star - legendary.  He deserved it and he had everything it took.  Charisma, looks. talent, personality, flare, and an acting style all his own.  Not to mention, the ability to completely change his look.  In my opinion, he'll always be up there as one of the performing greats - stage & screen.  He is most certainly a star now, and the most dazzling kind you can be.  The kind that sparkles and shines eternally, in the night sky.

Anyway, I just wanted to comment on that scene.